Identified as S 98th St, Old Cheney – ‘A’ St, Lincoln, the proposed project would pave approximately 3.0 miles of South 98th Street between Old Cheney Road and ‘A’ Street in Lancaster County. The project would also construct a roundabout intersection at the future junction of South Street and South 98th Street. Construction may begin and/or end approximately 500 feet ahead of or beyond the actual project limits and 200 feet along major crossroads to accommodate transitioning the pavement.

The purpose of the project is to provide a safe and modern roadway, improve the reliability of the transportation asset, and to perpetuate the mobility of the traveling public. The need for the project is supported by several factors identified by a traffic study completed by the City of Lincoln and provided to Lancaster County Engineering Department. The existing condition of the roadway as gravel surfacing would not be maintainable under the projected traffic conditions. The operations and maintenance would be cost prohibitive. This project is needed because South 98th Street is an important travel route for the local community, area businesses, and residents in a growing part of the city of Lincoln and Lancaster County.

Proposed improvements would include minor grading, new pavement, and new shoulders for the entire length of this project. The intersection for a future junction at South Street and South 98th Street would be constructed as a single-lane roundabout and include major grading. Additional work may include culvert improvement at spot locations. Existing driveways and intersections would be reconstructed. Construction could begin as early as spring of 2023 and be completed by the fall of 2023. Construction scheduling would be coordinated with the planned construction project on South 98th Street north of ‘A’ Street and is subject to change 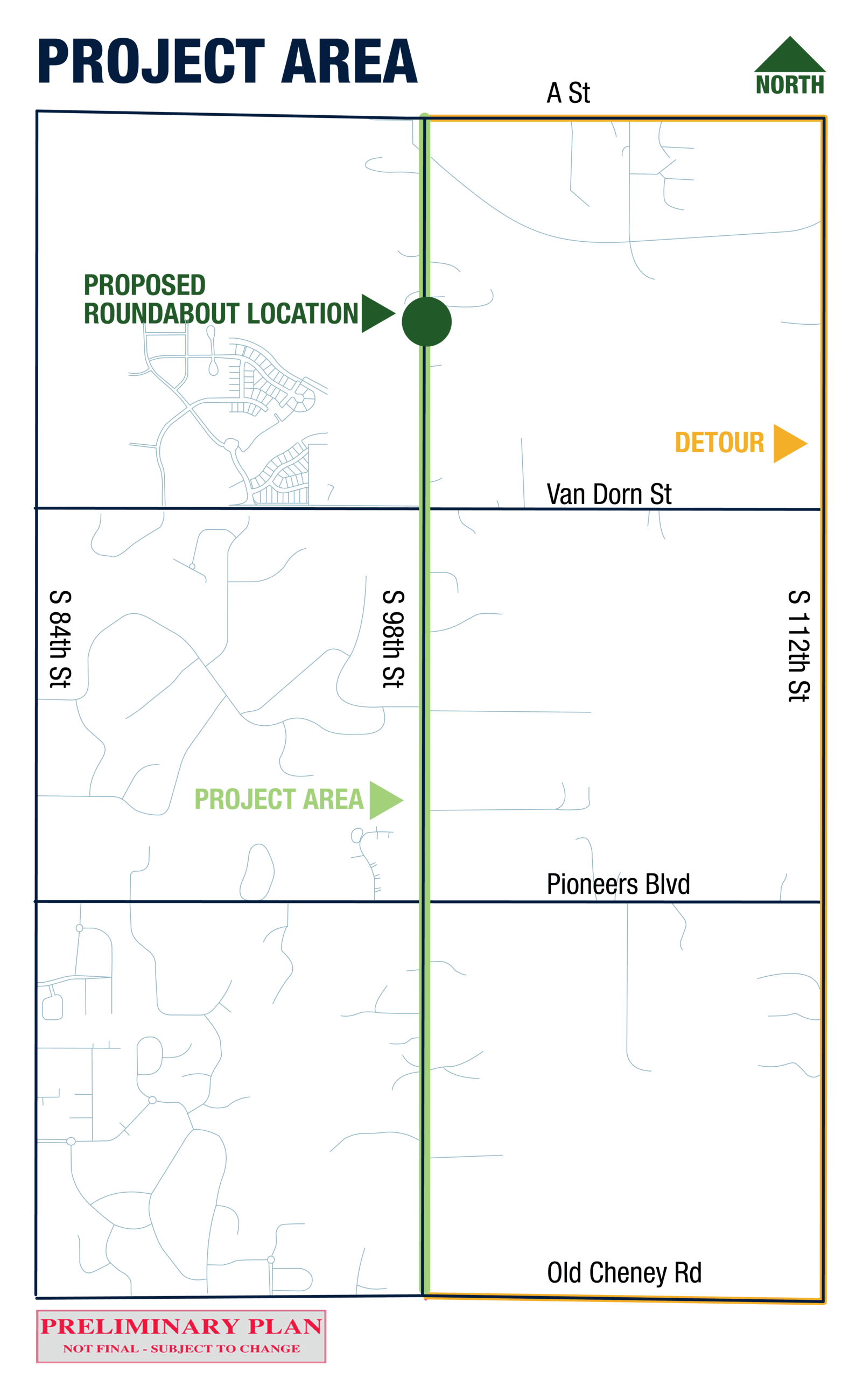 The proposed project would require the acquisition of additional property rights, which could include new right-of-way (ROW), control of access (CA), permanent easements (PE), and/or temporary easements (TE). If your property is impacted by this project, you will be contacted by a representative once the design footprint has been established. Access to adjacent properties would be maintained during construction but may be limited at times due to phasing requirements. Some phases of the project would require detouring South 98th Street traffic during construction of the intersection improvements and new pavement; a designated detour would be provided utilizing Old Cheney Road to 112th Street and ‘A’ Street back to South 98th Street. Other phases may be constructed under traffic with lane closures controlled with appropriate traffic control devices and practices.

Potential impacts to environmental resources would be evaluated as the proposed project design progresses. These resources include, but are not limited to, environmental justice/civil rights, cultural resources, historic properties, publicly owned recreation properties (Section 4(f)), endangered and threatened species, hazardous materials, water quality, and other water resources, including wetlands. There may be minor impacts to Section 4(f) resources, such as the MoPac Trail and Charles L. Warner Trailhead, but access would be maintained during construction.

Meeting Handout about the Project for the November 18th Public Meeting: View Handout

Alternative Intersections: Roundabouts and how they work