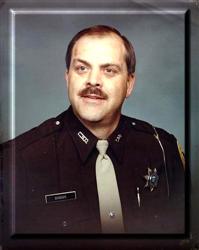 Craig Douglas Dodge, the son of Hale and Ethel Dodge of rural Waverly, was born August 17, 1944. He attended Lincoln Southeast High School, graduating in 1962. He continued on to the University of Nebraska Lincoln studying Business Administration. During this time he joined the United States Marine Corps Reserve from which he was honorably discharged in 1967 having attained the rank of Lance Corporal.

Craig joined the Lincoln Police Department, working there briefly as a foot patrolman and cruiser officer. His life-long interest in the welfare of others led him to co-found Eastern Ambulance Company, and he sought certification from Creighton University in 1982 as a paramedic. Dodge remained involved in all phases of the ambulance company until 1983. Subsequently, he was self-employed and served as a reserve deputy sheriff for both Adams County and Lancaster County, Nebraska.

The Lancaster County Sheriff’s Office hired Craig as a Court Officer in February, 1985. On June 6, 1985, he was hired as a deputy sheriff and received his certification from the Nebraska Law Enforcement and Training Center in Grand Island, Nebraska, in December of that year, graduating president of his class. Deputy Dodge was assigned to the Patrol Division in Lancaster County. He excelled in the manner in which he was able to handle medical emergencies and coroner calls. Receiving praise from both victims and medical professionals, his competence and demeanor had a calming and reassuring effect upon those he contacted.

At 5:21 a.m., March 14, 1987, Dodge was dispatched to a belated domestic assault in Hickman, Nebraska. The mother of the assault victim telephoned the Sheriff’s Office to report her daughter had phoned saying she had been assaulted by her husband, who had then left the apartment. While Deputy Dodge was en-route, a second caller who had been assisting the assault victim, reported that the husband had returned, struck her, threatened her with a handgun, and made her leave. Two additional deputies were then dispatched from approximately 20 minutes away.

Deputy Dodge arrived in Hickman at about 5:30 a.m. Approaching the building on foot, he contacted the witness who told him the assault victim had been beaten, and the person responsible, the husband, was brandishing a pistol and had threatened to kill the family. The couples children, 3 years and 5 weeks of age, were in the apartment, and the wife could be heard pleading with the husband the apartment.

Knowing that his backup was some minutes away, Dodge, placing the welfare of the woman and children ahead of his own, decided to contact the suspect and attempt to reason with him. The suspects responded at the apartment door, holding his wife in front of him with an unseen.38 caliber revolver at her back. For several minutes the men conversed while Dodge tried to ascertain if everyone was all right, all the while stalling for time. Suddenly, the suspect raised the gun and fired a single round striking Dodge in the face.

The suspect fled the building with several weapons while the suspect’s wife called 911 reporting the shooting. Backup units arrived about 5:45 a.m. The suspect was arrested without incident after disposing of the weapons in a nearby creek. Medical units were unable to revive Deputy Dodge.

The suspect was charged with first-degree murder and using a weapon to commit a felony. He was subsequently convicted and is serving a life term.

Following this tragedy, Barbara became actively involved with Concerns Of Police Survivors, Inc. (COPS), a national organization dedicated to helping police survivors cope, heal, and begin to rebuild their lives. She is a past National President of COPS and was invited to speak at the dedication of the National Law Enforcement Officer’s Memorial in Washington, D.C. Each year during National Police Week in Washington D.C, Barbara conducts the seminar "From Victim To Survivor" for new police survivor families. In addition, she is a member of the Nebraska Law Enforcement Memorial Committee which pursues fundraising for the Nebraska State Law Enforcement Memorial.