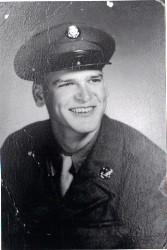 Deputy Sheriff William D. Johnson died on March 5, 1959, after suffering a heart attack at the Lancaster County Courthouse. He just completed a prisoner transport when he complained of not feeling well and laid down in an office to rest. He was found unresponsive and transported to St. Elizabeth Hospital where he was pronounced deceased.

Deputy Johnson was twenty eight years of age at the time of his death and was survived by his wife, Gloria and two daughters, Christine Ann and Sandra Lee.