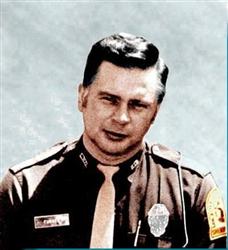 Franklin Roy Furrer was born September 6, 1932, in Lincoln, Nebraska. He attended High School in Walton and graduated in 1949. Furrer went on to college and received a Bachelor of Science degree in Agriculture at the University of Nebraska Lincoln in 1956. From 1952 to 1954, Furrer served his country in the Navy and received an honorable discharge. While working as a lab assistant for the Lincoln-Lancaster County Health department, a rural carrier for the U.S. Post Office, and a night-watchman for Bruning Company, Furrer farmed and raised a family for several years.

On August 15, 1969, Furrer became a Lancaster County Sheriff's Deputy assigned to night patrol. Furrer achieved the rank of Sergeant on May 17, 1973, and worked in the patrol division.

On November 16, 1973, Sergeant Franklin Furrer died after suffering an apparent heart attack on October 28, 1973. On that date, Sergeant Furrer had been assisting on a drug raid at a residence located in the Walton area where investigators suspected marijuana was being used and sold. Shortly after entry into the house, Sgt. Furrer fell to the ground clutching his chest. He was taken to a local hospital by fellow deputies at the scene. Sgt. Furrer never regained consciousness and died on November 16, 1973.

Sergeant Franklin Furrer was 41 years of age and was survived by his wife, Carmel, who was pregnant at the time, and by four children from a previous marriage. Sergeant Furrer was honored as an officer who fell in the line of duty on May 13, 1995, at the National Law Enforcement Officer's Memorial sixth annual candlelight vigil ceremony in Washington, D.C.